The Alberta Heritage Music Project aims to connect youth and seniors in the sharing of musical memories from the seniors’ teenaged years (can also be from when they were younger or a little older). The story-memories are then recreated through music, dancing, acting, sets, costumes and community involvement.

The goal, when Nathene Arthur started this program, was to build relationships between the generations, and illustrate how music can bind people together, and how strong it is in our memories. All four projects to date in Cochrane, Red Deer and Fort McMurray met with great success and feedback. Many volunteers donated their time and effort to put them together.  As an AMEF program, help will be available through both Coordinators of the Project; Nathene Arthur and Cara McLeod, and also through the office.

See the Step-by-Step Guide on how to bring this program to your community.

Interested groups and individuals are being encouraged to plan well in advance to assist AMEF in budgeting and finding funding for the Project.

The Alberta Music Education Foundation has partnered with United Active Living again for a new version of the Alberta Heritage Music Project.  This project begins in the middle of January of 2019, and will culminate in a presentation at the Garrison Greens United Active Living Communities location on February 8, 2019.  Watch here for more details as they arise.

Combining music with storytelling is the premise behind a new project between United and the Alberta Music Education Foundation (AMEF) that brought residents and students together at two performances at United communities.

United and AMEF recently signed a partnership agreement that encourages the use of music to add a new dimension to traditional storytelling programs. The result was two amazing performances involving residents of United’s two communities and students from Bishop Carroll High School in Calgary.
"This was a unique way to bring important stories to light that might otherwise have not been told," said Samantha Whelan Kotkas, a facilitator on the project. "We asked residents for a favourite song from their younger days and then asked them what the song reminded them of. Then we paired students with the residents to create a skit around the story, which incorporated the music. The result was highly entertaining!"

83-year-old Sonia Eisler from the Garrison Green community used the 1967 song What a Wonderful World to recall visits to B.C.’s Harrison Hot Springs and the wonderful times her family had there. "I was a little nervous about telling my story but everyone was so encouraging. They made it a lot of fun and I really enjoyed it!" said Sonia. "Music has always been a big part of my life. It was nice to hear the talent and gifts that the students brought to the performances. While I was reluctant at first, this experience has been inspiring and I’m going to become more involved in some of the other events Garrison has to offer."

The students not only supported the stories the residents had to tell, but displayed an amazing range of talent on their own. Student Katie McMillan, backed by musicians Aaron Young on guitar and Denis Dufresne on violin, sang an emotional rendition of Leonard Cohen’s Hallelujah for a friend who had recently passed. Amy Gulewicz used the Beatles’ Hey Jude to talk about music being more about emotion than the notes, Michael Nimegeers and the students performed Everybody Wants to be a Cat from the play The Aristocats, and Jack Storwick talked about his love for collecting vinyl records after attending the Las Vegas play Love, featuring the Beatles’ music. "A lot of work goes into things we take for granted," Jack told the audience. "After hearing that album, I appreciated how much work it took to create it. The lesson for me was, never take anything for granted."

Garrison Green’s Lil Tyler and student Amy Gulewicz performed a short play based on the 1936 song It’s a Sin to Tell a Lie. Lil recalled a time when she was eight when an aunt became engaged, but then was heartbroken when the man called off the engagement in a letter, and even asked for the return of the ring. "This project was a terrific idea," said Lil. "That song was popular at the time so in my mind that event is tied to the song. Later, when Hitler came to power, that song was tied to something much bigger."

Fish Creek resident Agnes Rewucki used video to recall a trip to India by ship, and while onboard, she became known as an unbeatable ping pong player, which she re-enacted for the appreciative audience.
And Fish Creek resident Ernie Orford and Michael Nimegeers recalled Ernie’s love for the violin, but his family couldn’t afford one so he turned to the harmonica, which Ernie played for the audience. Ernie recalled that he later purchased a violin through the Eaton’s catalogue, and he became a self-taught left-handed violinist performing at small house parties.

AMEF chair Rolf Bertsch, a long-time friend of United, suggested the project as a way to bring older adults and students together. "AMEF did a similar project several years ago, but this one was so successful that I see it expanding to include other older adult communities where the arts are an important component of their philosophy."

United’s music director, Jill LaForty, who saw the project through from its inception, saw the relationship-building that happened among the communities and the participants to be one of the most important aspects of the project. "For residents who came to our final presentations, they saw their neighbours in a whole new light. They saw some people who had been very quiet, suddenly expressing themselves or they discovered a talent, like Ernie playing the harmonica, that they had no idea was there. And the closeness that developed between the students and our residents in some cases will definitely continue long after this project is just a memory. Creative expression and relationship building – that’s what this was about." 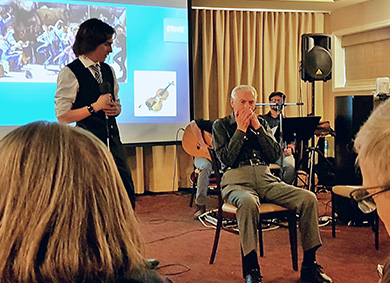 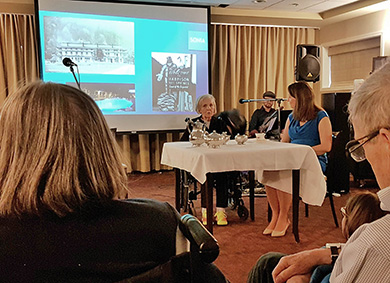 I have been a studio voice teacher in Fort McMurray for 5 1/2 years, and launching the Alberta Heritage Music Project has been one of the best decisions I have made in this capacity.

All of the voice students were not only receptive, but generous of their time and spirit during the interview process that took place in February of 2009. They were eager to prepare and perform the story memories from the seniors that they met and talked with. I watched all of them, without exception, be gracious and attentive with this generation that they may have thought they had nothing in common with.

And yet, they most certainly did. They were transformed when they laughed and shared intimate moments with people sharing their love of music and dancing

I was extremely fortunate to work with a supportive and enthusiastic team. Nathene Arthur shared her expertise and guided me through the process. My supervisor at the Keyano College Conservatory, Sharon Price, was immediately responsive to this and helped in the planning and organizing of all aspects. Tim Moen, who agreed to be our videographer, was caring and creative in the interviews and the editing of the video, and brought a team of volunteers together to help with lighting and capturing the performance as well.

I believe the Alberta Heritage Music Project is a well thought-out and heartfelt project. It has the ability to strengthen and touch students and seniors and their families, and entire communities. I would encourage anyone that has a love of music, and believes that it adds colour and intensity to our lives, to take part in the Alberta Heritage Music Project in your community!

The Alberta Heritage Project for 2007 was held in Cochrane, Alberta at the Bethany Care Lodge, May 27, 2007. It was a four-part project.

Part I was back in March 2007 when several teenage music students interviewed 14 seniors at the Lodge about the musical memories they had from their childhood and teenage years.

Part II was April until May 26th when these and other students chose which stories they would like to be part of — for various reasons. Sometimes they already knew that song (like Mairzy Doats or Blue Skies); other times there was something about the senior themselves (the teen and the interviewer had a bond) or the story line caught their interest. Other times it came down to a matter of skill — can I do ballroom dancing? Or can I play in a marching band? Rehearsals were held in private homes, with teachers, with bands, in dance studios, and at Bethany Care Lodge on Saturday, May 26th, for a drop in by-appointment rehearsal on the stage. There were still program and performer changes happening right up to May 26th, and in one instance, in the middle of the Concert itself! We got a reporter from the Cochrane Times to do an interview the week before, and there was a half-page article with a picture in the Cochrane Times May 23, 2007.

Part III was the Concert itself. It started at 2 pm and ended at 4 pm. We had originally hoped to be done within 1 1/2 hours because we feared losing the audience. As it turned out, for the first time ever in the memory of the directors at Bethany Care, every single senior stayed and was totally involved in the production until the very end. Both the Recreation Assistant, Shari Jefferies, and the Bethany Administrator, Barb Fredrich, made a point of stating how amazed they were at the level of interest, involvement and sense of happiness the seniors displayed during and after this Concert, even “the difficult seniors who are normally very critical and unhappy with life in general” were vocally and visibly positive and talking about this Concert with enthusiasm for days afterward. As in the past AHMP, during the concert there was much applause, clapping, foot tapping, many tears, some hooting, and many, many smiles and laughter. The performers really went the extra mile and rose to the occasion, many of them never having been on a stage before; some as young as 4 years old, and others professional CPO members who traveled from Calgary and farther to take part.

Part IV involved the production of a DVD video which will be used to promote the AHMP across Alberta and Canada. We are currently in the process of getting the recording rights to as many of the songs as possible so they may be legally included into that DVD. All performers signed a waiver that allowed their image to be used in the DVD without further recompense. The DVD will include portions of the interviews, rehearsals, concert, a short on how to do an interview and a short recap by the Director at the end.

This project was a win-win for all involved, and made a very real difference in the lives of all involved. It was one of those things that we do in life that we know is the right thing to do. Although it was rather labour intensive at times, the end result was beyond price ... we did get to sleep eventually, and our dreams are the dreams of those who know they made the world a better place, if just for a little while, and we will be the better person for our labours. 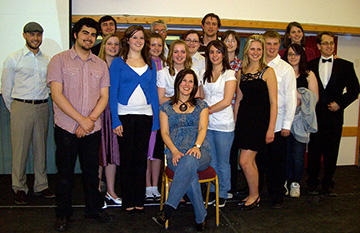 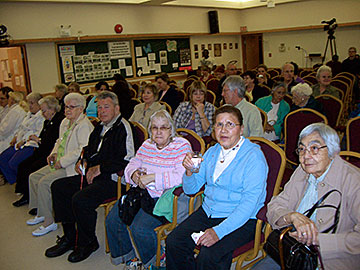 Letters of support from citizens of Ft. McMurray: 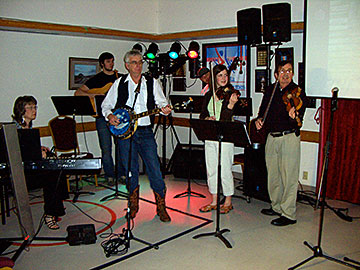 Music is the art which is most nigh to tears and memory.  –Oscar Wilde