The AMEF Recognition Award is presented yearly at Music Conference Alberta. This prestigious award was established to recognize music educators (kindergarten through college, in private and public schools and studio teachers) who have made a significant and lasting contribution to the field of music education in Alberta.

Colleagues, students, friends or other community members are encouraged to make a submission to recognize a deserving individual that has pursued excellence in music education in any genre. 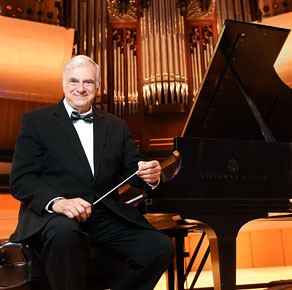 “Music is really a combination of emotion, colour, light, sound, silence, intellectual grasping and seeing the whole picture. All of those things come together in great works of art. This is one of the reasons that music is so important. It helps with the thinking process and brain development and emotional development and skill development in every field, not just in music. That’s why it’s so important and that’s why we still advocate strongly for the inclusion of music education in public schools.” –Michael Massey, upon receipt of The Alberta Order of Excellence, 2016

Michael Massey has been a fixture in Edmonton’s classical music scene for 50 years. He has inspired thousands of young musicians through the Edmonton Youth Orchestra Programme and countless others through musical performance. Michael is an accomplished and versatile musician: he is a pianist, a conductor, an orchestrator, a composer, and a teacher — but most of all, he is a mentor and role model for young musicians.

Michael was born in London, England. At age 12, he moved with his family to Canada and started a new life in Edmonton. Two years later, he began formal piano studies under Jean-Pierre Vetter, developing as a musician and appreciating the power of a good teacher.

After earning a Bachelor of Music degree from the University of Alberta under the guidance of Professor Alexandra Munn, Michael moved to Switzerland, spending two years at the Geneva Conservatory studying with the renowned pedagogue, Louis Hiltbrand, where he was awarded the Premier Prix de Virtuosité and performed twice as soloist with L’Orchestre de la Suisse Romande. Michael would go on to establish himself as a soloist, accompanist, and chamber musician throughout Canada.

Once, on a dare, Michael successfully auditioned for the Edmonton Symphony Orchestra on cello, which had been his second study instrument while at university. This initial position with the ESO would spawn a relationship that has lasted almost 50 years. After playing cello for two years, Michael moved into the role of ESO pianist, a position he continues to hold. Michael has also been a frequent soloist and occasional conductor with the ESO.

Michael emphasizes that it was the experience of being an orchestral player, both as a cellist and as a pianist, that would determine his musical path and define his lasting legacy.

Since 1977, Michael has been Music Director of the Edmonton Youth Orchestra Programme. During this time the orchestra has flourished and grown, doubling from one to two orchestras.

Now in his 43rd year of directing the youth orchestras, Michael has been a conductor, teacher, and mentor to thousands of young musicians. His innovative, wide-ranging, and demanding repertoire selections challenge and stretch his students’ abilities. Michael’s time, energy, and dedication to the Edmonton Youth Orchestra Programme have resulted in wide acclaim and drawn large and diverse audiences. The Senior Orchestra played for Queen Elizabeth II and the Duke of Edinburgh in 2005, and has toured in Australia, Austria, Great Britain, Los Angeles, Ontario, Quebec, and Alberta.

Even while leading the orchestras, Michael continues to perform, compose, and instruct. As a piano teacher, he has taught classes large and small. He reflects that teaching is very rewarding. “You learn a lot about yourself and you learn a lot about music when you teach it.”

Michael’s passion for music has influenced many of his students who are now teachers and performers themselves, and can be found in orchestras and at universities and conservatories across Canada, the United States, and Europe.

Michael’s accomplishments span a 50-year career. This includes the founding of the Northern Alberta Concerto Competition in 1980, which continues to provide valuable experience for young soloists. In 1984 and 1996 he wrote and published The Canadian Repertoire Manual, a source book and analysis of Canadian music suitable for youth orchestras. Michael has appeared as a guest conductor and piano soloist with the Edmonton Symphony Orchestra, the Calgary Philharmonic Orchestra, the Philharmonia Orchestra, and the Scottish National Orchestra.

In 2002 Michael was inducted into Edmonton’s Cultural Hall of Fame as an Artist-Builder, and awarded the Queen Elizabeth II Golden Jubilee Medal. In 2016, for his long service to the Province, he was awarded the Alberta Order of Excellence — the highest honour the Province of Alberta can bestow on a citizen. In 2017 he received the Lifetime Achievement in the Arts Award from the St. Albert Mayor's Celebration of the Arts.

When he’s not busy practising, rehearsing, performing, orchestrating, teaching, composing, or being otherwise engaged in music-related activities, Michael spends time enjoying some of his other passions. These include creating and caring for his beautiful English garden, golfing, cooking, reading, and watching classic movies.